Why I Chose Xenon Under Cabinet Lights

I purchased two of these Utilitech 24 inch xenon under cabinet units to replace the older incandescent units that were already installed in my kitchen when I moved into my house.

There were a couple of factors that made me choose xenon units rather than incandescent, fluorescent or L.E.D. The majority of under cabinet units are fluorescent. This is because they are cool to the touch and use very little power. There are some drawbacks though, Fluorescent lights can not operate with a dimmer switch, this is a feature that I particularly wanted. Also, I am not a fan of the light fluorescent bulbs produce, it seems to bleach the colour out of it’s surroundings, xenon bulbs have a light that it much closer to natural daylight.

Purchasing them was a fairly simple process, I browsed around my local well known chain hardware store for about half an hour to find what I wanted, a quick check on my iPhone showed me that an amazon seller had them at a better price, so that’s where I ordered them from. 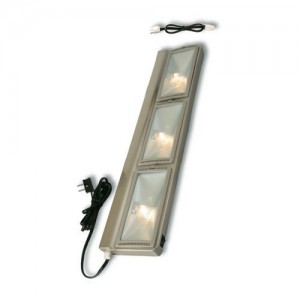 They arrived three days later, time for the big unboxing. The first thing that really hits you as you get the lighting unit out of the box is how good they look. Utilitech have done a great job with their exterior styling of the unit, the nickel finish gives them a premium look, it’s a shame they are going to be spending their lives out of sight under my kitchen cabinets.

The all metal construction feels solid with a substantial weight that gives the impression that these lighting fixtures will last for a very long time. Each lighting unit has a three way switch for selecting off, high and low settings. I am very impressed at the light’s removable covers, this means the lights are very easy to clean, an essential feature for a kitchen where hygiene is important.

Each unit contains 3 x 20 watt xenon bulbs for a total power output go 60 watts. These bulbs should last at least a year and when they do go, replacements are inexpensive.

Although not the slimmest under cabinet lights I’ve ever seen, they are shallow enough to be hidden from sight in most kitchens.

When installing these lights, you are given the choice whether to hardwire of simply use a wall power outlet to power them. I chose to hardwire them as I think it looks neater and also I did not want to lose a wall outlet.

Hardwiring the units was also a sensible option for me because the older lights I had were hard wired and the routing and cabling left behind could easily be applied to my new xenon under cabinet units. Only undertake hardwiring yourself if you are qualified to do so, if you are not, for safety reasons employ and electrician to do the wiring, it’s a fairly easy job and should take little time and be inexpensive.

The detailed instructions meant that I had them installed using the supplied mounting screws within a matter of minutes. The only thing that can be tricky for the inexperienced is drilling the holes for the screws upside down. Some may find it easier to remove their entire cabinet from the wall.

Switching on the units for the first time nearly took my breath away. The positive change they had on the kitchen was amazing, Everything seemed clear and even the low setting on the units provides enough light to work by, my wife is happy because she can finally see if she’s putting enough milk in her tea because the colours of objects illuminated by the xenon bulbs are more accurate.

Because the bulbs are xenon, they do generate some heat. This is not too much of an issue, but I am going t avoid keeping easy perishable items like fruit and vegetables in the bottom of the kitchen cabinets they are installed under.

Many friends have commented that the bulbs seem to give my kitchen a “classier” look.

I recommend these utilitech xenon under cabinet lighting units to anyone who wishes to brighten their kitchen or workspace.